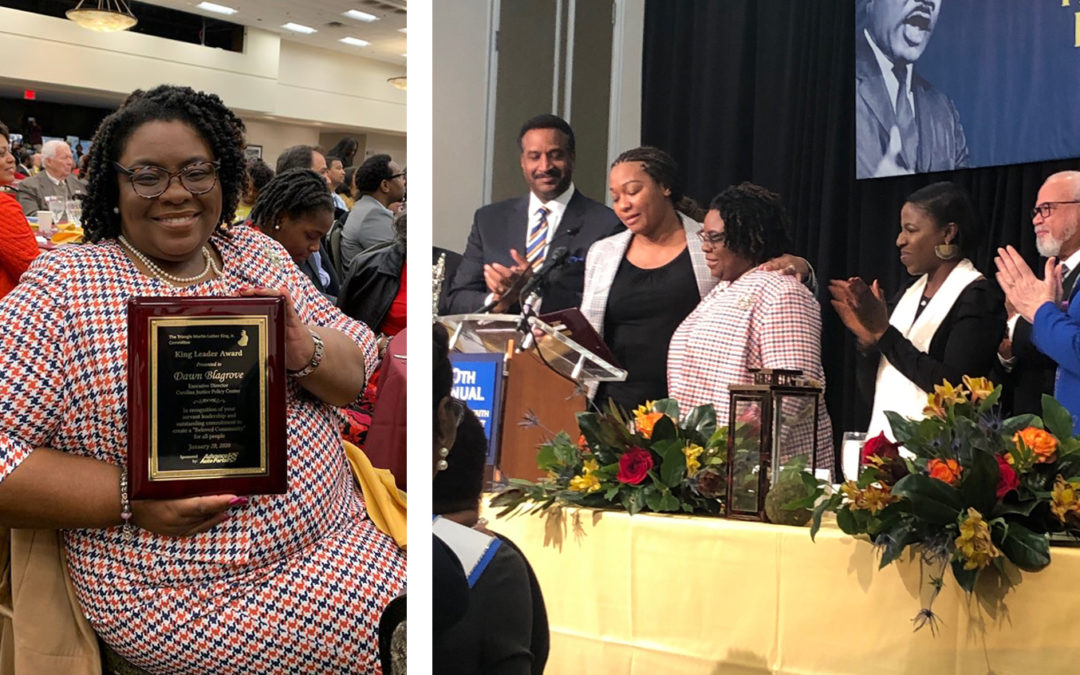 At Emancipate NC, we are thrilled to announce that our Executive Director, Dawn Blagrove, has received the 2020 King Leader Award from the Triangle Martin Luther King, Jr. Committee. Below is her winning personal essay, reflecting on how we must, as Dr. Martin Luther King, Jr., said “accept finite disappointment but never lose infinite hope.”

I was a child of the 1970s, raised by Black Nationalist parents, surrounded in love by a tight-knit diasporic community in Milwaukee, and told by an elder Black woman as an infant that I would be a “leader of people.” I was already fulfilling her prophesy at the age of 12 when a white teacher told our homeroom that Black people “didn’t want to work hard” and “just wanted to have fun.” I went slap off. I was in big trouble at school, but my mama was proud.

I wanted to be a revolutionary. Or a lawyer for revolutionaries. I wanted to wake people up. I saw injustice and poverty and racism everywhere I turned. And I saw my classmates sitting numb on the sidelines, accepting finite disappointment as the final word in the story.

Today, as the Executive Director of the Carolina Justice Policy Center and Emancipate NC, I work to empower Black communities to take action in the criminal legal system to end mass incarceration of our people.

Mass incarceration is the preeminent civil rights issue of our era. The State of North Carolina imprisons Black people at a rate of 10 times compared to white people. More Black people are incarcerated now than were enslaved at the beginning of the Civil War. The collateral consequences on our community are devastating—trauma, stigma, separation from family, neighborhood rupture, economic loss, disenfranchisement, housing access, and educational attainment. As a Black female attorney who has practiced in the criminal courts, I never lost sight of the individual stories. In too many courtrooms, judges and lawyers act without acknowledging the humanity behind the paperwork and bureaucracy. Our peoples’ freedom is at stake.

And yet, I have infinite hope. Our community can intervene in this system. Change is happening from below. CJPC brings this message to schools, civic groups, and churches. We elect the Sheriff. We elect the District Attorney. We can decide to eliminate pretrial detention on cash bail. We can initiate community-based restorative justice programs to heal harm without resorting to cages. We can raise the age of adult criminal jurisdiction to keep our children out of prison. We can dismantle racism in our schools and courtrooms through education and advocacy.

I am proud of CJPC’s recent victory in Wilson County. We brought together stakeholders from the public schools, social services, the NAACP, and law enforcement. And together, through community meetings, we decided that the police should stop arresting people for shoplifting, marijuana, and trespassing, and instead, should give written citations for those offenses. We decided that these crimes do not require pretrial incarceration to keep our community safe and healthy. This policy change will keep Black families together. It is a small step, but it is one that we take together.

With Liberty and Justice for All,
Dawn Blagrove, Executive Director