Finding the Blood on North Carolina’s Hands in Montgomery, Alabama 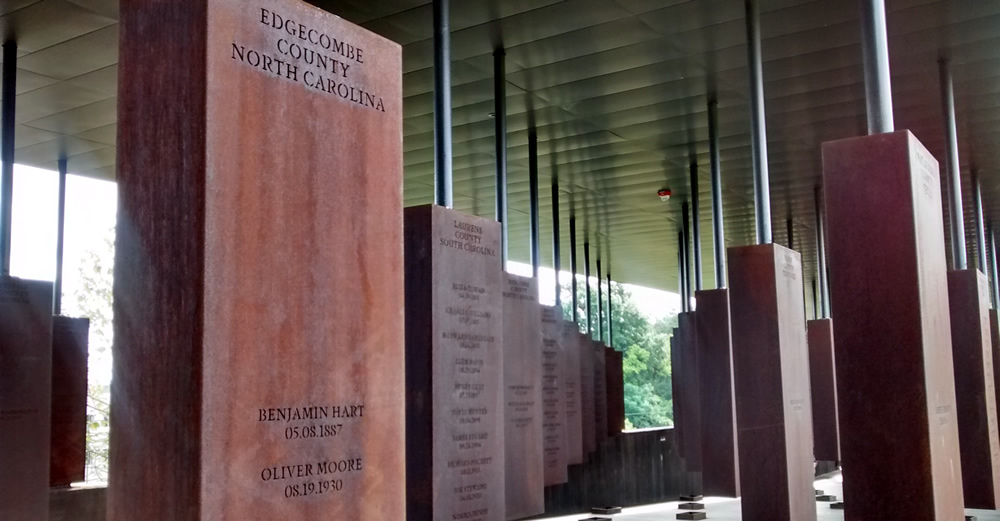 By Mandie Sellars, CJPC Board Member

It wasn’t until I saw the coffin-sized metal box above my head with the name Wake County on it that I froze. My body could no longer move, as tears streamed silently down my cheeks. The box bore three simple pieces of data: the name of the county I had lived in for much of my life, the name George Taylor, and the date he was mutilated, shot over 100 times, and hung from a tree by four white men: November 5, 1918. This act of terror happened right where I grew up, and I could no longer claim ignorance. My body was consumed by truth, with water on my cheeks and fire in my heart.

In April this year, the Equal Justice Initiative opened a ground-breaking memorial and museum in the heart of Alabama that I was lucky enough to visit recently.

EJI’s National Memorial for Peace and Justice makes America’s unspoken past of racial terror viscerally present. Body-sized metal boxes, engraved with the locations, dates, and names of those who were lynched stare you right in the face when you enter. You can reach out and trace your fingers over the letters. As you walk down through the memorial, they rise above your head, forcing you to reckon with their brutal, senseless murder. The victims are present in a way that is both dignified and chilling.

I saw the name of my state on box after box. The state I call home, where I raise my children, was also home to 123 documented lynchings and hundreds more that weren’t recorded. People of color were tortured and murdered in North Carolina for “allegedly stealing a ham” and “frightening a white girl.” A crowd of over 1,000 white North Carolinians cheered as a Black man was mutilated and hanged, posing with the body for photos.

In this memorial, EJI honors a past America doesn’t seem to want to remember. At their nearby Legacy Museum, the complete narrative of the kidnapping, terror, segregation, and overincarceration of people of color in America is made fully present. Personal stories and overwhelming data, historical accounts and interactive exhibits, all shine bright spotlights on the violence, brutality, and injustice that did and continues to happen.

In one exhibit, a man who is alive today reflects on his life: arrested at age 15, and spending the next 42 years picking cotton in a Louisiana penitentiary. He spoke of abusive guards, who only whistled their commands, rather than speak directly to those who were incarcerated. A stark reminder that modern-day slavery in our justice system is alive and well.

As a board member of the Carolina Justice Policy Center, I came back from this experience both deeply saddened and fully renewed in my desire to fight for those still being marginalized, abused, and killed by a broken justice system. Because many Americans, especially those in power, haven’t fully reckoned with the sins of our past, we perpetuate injustice today.

Real and lasting change will only come when more and more Americans fully face what was and is being done to people of color today. The work of advocacy and education must be done to light a fire for change in their hearts.

This work must be done tirelessly, carefully, and deliberately. Supporting one victim of police violence at a time. Sharing one story of a life destroyed by an unnecessary arrest. Attending one meeting and speaking truth to power. The work CJPC is, and hopefully will continue to do, with your support. It is nearly impossible to change a broken system if people don’t know or believe it needs fixing. Together we can, and we must, use our truth to light a fire for change – one heart and one mind at a time.